Compagnia Baccalà are Camilla Pessi from Ticino and Simone Fassari from Sicily. They met while training at the Scuola Teatro Dimitri and teamed up to form Baccalà Clown in 2004 and rebranded as Compagnia Baccalà in 2016. Between 2005 and 2009 they toured worldwide with a number of variety and circus companies. From 2008 onwards, working with Valerio Fassari, Pessi and Fassari began adding depth to their clown figures, finally developing their own distinctive artistic repertoire. Their first full-length evening stage programme, “Pss Pss”, directed by the Belgian Louis Spagna, was created in 2010; it has since been performed more than 400 times in over 50 countries. Pessi and Fassari have received a number of awards for their work, including the Cirque du Soleil Prize 2009, the Audience Prize of the Geneva Festival des Arts du Cirque 2010 and the Audience Prize of the St. Etienne Festival des Arts Burlesque in 2014. 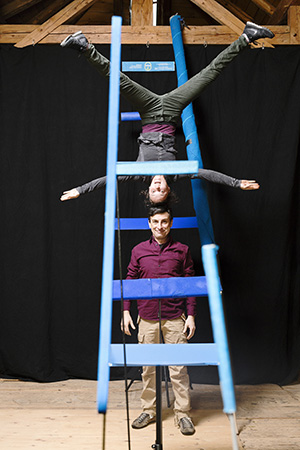 On stage, Pessi and Fassari play two oddball characters who love, squabble, make up, and fill the bare expanse with their presence as they do so. With their costumes and their pinpoint slapstick timing, they recall the aesthetic of silent film. He is tentatively determined to take the lead; she gazes wide-eyed at the world, at once needy and yet able to hold her own. All of this is conveyed without words, through movements and facial expressions that are both subtle and bold. The result is grand drama interspersed with comedy. Combining skilled acrobatics with heart-rending clownery, stretching out moments of silence for as long as they dare, the duo create an enthralling experience for their audience.

“Compagnia Baccalà plumb the depths and scale the heights of human nature, reinventing the figure of the clown and breathing new life into the Swiss tradition of clowning. Cinematographic in its approach, their show “Pss Pss” blends the grandeur of circus acrobatics with precision in the minutest gesture. Critics have compared Compagnia Baccalà to giants of the silver screen such as Buster Keaton, Charlie Chaplin, Jacques Tati, Federico Fellini and Tim Burton. And rightly so: because like them Simone Fassari and Camilla Pessi are exceptional and complete artists, united in a tender embrace of reconciliation and a future of great promise.”